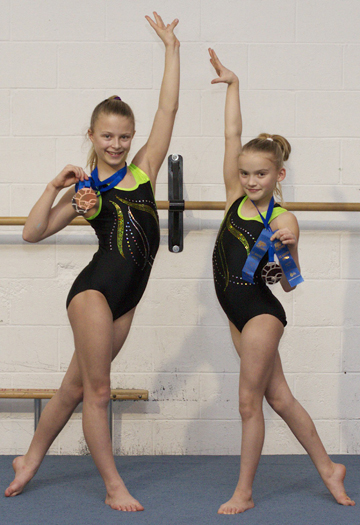 Three girls from the Campbell River Gymnastics Association represented Zone 6 at the BC Winter Games held in Penticton February 24th to the 28th.
The girls had an outstanding competition capturing the Silver medal as a team (six athletes per team) going up against the powerhouse mainland teams. The girls, accompanied by two Nanaimo athletes and a girl from Duncan, were only .175 away from the gold medal.
The team had an excellent competition and matched up well with other teams. CRGA individual highlights included Reese Wheeldon capturing the Bronze medal in the All Around competition and adding a 4th place finish on beam in the Finals as well as posting the top score on vault in the prelims before finishing in 7th place during the Finals. Brooklyn Batch scored a monster 9.65 to head into finals on bars in first place having a great bar routine to capture the bronze medal in the finals.
Nya Chailler also finished in 6th place in the All Around competition and took the 6th place ribbon on the vault in finals. Nya also qualified for finals on the floor and the beam. A job well done!!